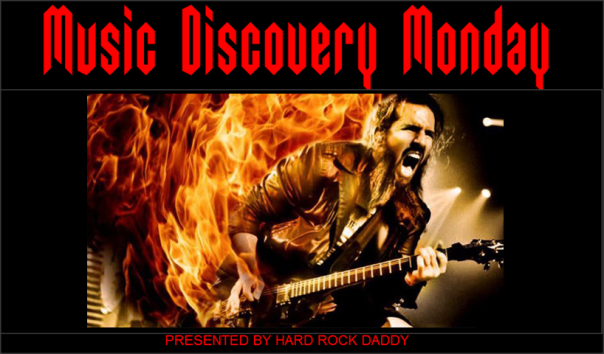 Each week, the HRD team shares songs that fly below radio’s radar, ranging from lesser-known artists to deeper cuts from both up-and-coming and established artists.

In addition to exposing the Hard Rock Daddy audience to new music that isn’t getting the attention that it deserves from radio, Music Discovery Monday also features a segment called “Hard Rock Music Time Machine,” which showcases older songs (from the 70s to today) that hard rock music fans may have missed at the time of release.

In addition to appearing on the embedded YouTube playlists beneath each section, all songs featured on Music Discovery Monday can be listened to by clicking on the hyper-linked song titles.

Daring to be different and not subscribing to any notion of what hard rock “should” be, Bumblefoot has delivered a track that is both lyrically and musically unique.  Incredible guitar playing is par for the course for Bumblefoot, but on “Little Brother Is Watching,” he showcases how talented he is as a singer.  The song opens up with anthemic gang vocals, transitions to a very cool vibe with distinct bass lines and then ratchets up the intensity with a heavy, danceable beat.  If you are a fan of intelligent, thought-provoking lyrics, this is a track that you MUST check out.

In a recent exclusive interview with Hard Rock Daddy, Ron “Bumblefoot” Thal shared the inspiration and meaning behind “Little Brother Is Watching”…

“I was about half-way through writing the album, and we already had some tracks done. I was doing the Guitar Gods tour through North America with Yngwie Malmsteen and Gary Hoey. We had a lot of time on the tour bus. I was writing the next parts of the album, and I always had this song in mind. It was a song that had to be written, and I thought that it would be a cool subject to touch on. I remember just sitting on the bus and all we did was crank Iron Maiden the whole time. It just sort of came together organically while I had two phones around me and my computer, and doing stuff on YouTube and social media. As I was living it, all of the words just started coming together.

As far as the meaning behind the song, we (Little Brother) are doing it to each other and also exposing the powers that be, catching undeniable proof of people abusing their power. It’s a good thing, but it’s also a bad thing because your privacy is being invaded. You don’t want someone taking video of you with your fly accidently unzipped and posting it on YouTube, but at the same time, it does have its purpose.

I remember when it started with people using nanny cams and you started seeing people abusing kids through the eyes of a teddy bear. It’s part of our life now, and you can’t fight it. A lot of old school folks are really threatened by it. They feel like they’ve lost control of their lives because they don’t get to approve what goes out into the world.

There is this added pressure of being perfect, so it’s either going to kick your butt, or just make you resign yourself to live unapologetically. Personally, if I make mistakes, I’ll own up to them, but I’m not going to walk on eggshells around humanity. I’m just going to be who I am and let go of the attempt to try and control everything that’s out there. If anything, it can be liberating knowing that I’m not going to win every battle, so I can just be myself.”

The rest of a fascinating interview with Bumblefoot will be posted in the near future on HardRockDaddy.com.

ART OF ANARCHY – “Til The Dust Is Gone”

Born out of an 18-year friendship between Bumblefoot and the Votta Brothers (Jon and Vince) that began on the New York music scene, featuring the distinct sound of Scott Weiland’s vocals and John Moyer’s melodic bass playing, this supergroup aims to “eradicate musical borders in pursuit of something brilliant.”  With their first single, “Til The Dust Is Gone,” they’re off to an strong start to achieving their goal.  It’s hard to think of another song that has incredibly beautiful Spanish guitar blended with moody, emotive vocals and intense driving rhythms.  There are influences in this track that might draw some unexpected comparisons, but rather than point them out, it is suggested that you give this one several listens to peel back the layers.  Bumblefoot’s production skills are equal to his vast skills as a guitarist.  Here’s hoping that this is the start of a great new group, not just another supergroup project that teases fans and then goes away.

Sometimes supergroups form without any attendant drama.  Such is the case with the rather quietly developing Temple Of Rock, the latest project formed around guitar hero, Michael Schenker.  Former Scorpions Herman Rarebell and Francis Bucholz provide an impeccable rhythm section.  Doogie White (ex-Rainbow) nails the vocals, and Wayne Findlay provides keyboards and further guitar support.  What results is solid hard rock with a bit of prog influence peeking out, and at times – as with this track from the newly released second album Spirit On A Mission – can be downright magical.

Tommy Karevik continues to demonstrate that he is a perfect fit for Kamelot as the symphonic/power metal band out of Tampa Bay prepares to release their second album fronted by him.  “Insomnia,” the first single, is set in a dystopian future plagued by overpopulation and a surveillance state run amuck. The drums and bass are tight, Thomas Youngblood’s guitar blazes, and the keyboards help the arrangements to soar.  Haven will be released on May 5th, promptly followed by a world tour starting in North America.

Italian symphonic metal band Secret Sphere has re-released an album from 2001, recorded fresh by their current lineup.  Songs like “Legend” (already brilliantly composed), only gain from the tightened arrangements, better production values, and the incredible vocals of Michele Luppi.  You may have seen Mr. Luppi’s name in the music news earlier this month, as he has been recruited by Whitesnake for keyboards and vocals.

IMPELLITTERI – “We Own The Night”

From Impellitteri’s latest release (Venom), “We Own the Night” features the legendary guitar work that you expect, with a tighter, smoother melody and rhythm than usual.  Rob Rock’s vocals are terrific as well.  I can imagine Graham Bonnet belting this one out.  It takes off from the first note and keeps driving. Great tune!

THAUROROD – “Heart Of A Lion”

Thaurorod brings a heavy dose of symphonic metal from Finland.  Andi Kravljaca’s vocals stand out, as he hits notes with the power and tone of Michael Sweet (Stryper).  This band is tight and fast.  “Heart Of Lion” is a riveting and inspirational ride.

While Bumblefoot may be known most for his work with Guns N’ Roses, this week’s featured artist is far more prolific than most people realize.  Beyond GNR, his resume runs much deeper than the two aforementioned tracks.  This collaboration with Tony Harnell (TNT), who recently became Skid Row’s new singer, shows that brilliant hard rock comes in many forms.  In this case, the stripped down, acoustic styling leaves room for both Harnell and Bumblefoot to shine as they deliver a masterpiece that is simultaneously beautiful and melancholic.

Started with the intention of being a solo project during his TNT days, Tony Harnell ultimately formed Starbreaker with Magnus Karlsson (guitar/keys), TNT drummer, John Macaluso and bassist, Fabrizio Grossi (who has since been replaced by Jonni Lightfoot).  To date, the band has only recorded two albums (the last one being in 2008).  “Lies” – off the the band’s eponymous debut album – is a powerful, melodic rocker that features Harnell’s classic TNT sound infused with the moody sensibility of today’s rising stars, Nothing More, and an intensity that perfectly captures the essence of the subject matter.  It’s unlikely to happen, but this would be an interesting track to re-record with Skid Row.

It’s probably tough to mention any song from an album that sold 30 million copies as being “unknown” or even “underappreciated,” but this particular track isn’t one that gets revisited quite as often as the five singles that the album spawned.  I revisit it here largely because the older that I get, the more often I seem to have use for the general sentiment.

I climbed into the time machine this week searching for something.  The door popped open, I stepped out, and tripped over something entirely different.  Before Robin McAuley stepped into the Michael Schenker Group and provided some stability (eventually morphing briefly into a renamed McAuley Schenker Group), the Irish vocalist was part of a U.K. band that released a couple of albums.  Among those records was Samurai, which included this somewhat light / pre-metal era track that I discovered I could still sing along with word for word.  Funny what sticks with you even if you don’t realize it.

Insane technical prowess meets layered, shifting songwriting in this stunning piece from Seventh Wonder – another amazing band fronted by Tommy Karevik (Kamelot).  From their 2010 album, The Great Escape, this is a great introduction to these progressive metal masters from Sweden.  And once you’ve been introduced, don’t miss the title track, an epic piece that clocks in at over thirty minutes to close the album.

In 2005, Glenn Hughes (Deep Purple, Black Country Communion, California Breed) released Soul Mover, a solo effort blending hard rock with funk, soul and blues.  The title track enjoyed some popularity, but there are also several lesser known tracks worthy of note.  “Miss Little Insane” is a bouncing number that highlights Hughes’ vocals, along with a grooving rhythm section and some brash, unusual guitar work.  It’s quite catchy, with lots of talent on display.

Rata Blanca (White Rat in English) is Argentinian heavy metal.  “Solo Para Amarte” (only Love) will grab you right away and hold on regardless of whether you can understand the Spanish lyrics or not.  Adrián Barilari’s vocals and tremendous lead guitar work from Walter Giardino are both truly impressive.  The rousing applause is the only giveaway that this is a live rendition of the original from 1993.

Rainbow’s time machine treasure “Kill The King” was paid great respect back in 1999 by an ensemble known as Catch the Rainbow – a band steeped in great metal DNA.  Uli Kusch (Helloween – drums) and Henjo Richter (Gamma Ray – guitars) lead this great cast built from Primal Fear, Rough Silk and other great groups.  Give the entire album a listen.

To be considered for Music Discovery Monday, please e-mail a link to the song being submitted on YouTube and an artist bio to…

This site uses Akismet to reduce spam. Learn how your comment data is processed.

Get weekly updates from everything happening on HardRockDaddy.com

We promise never to sell or share your email address.

HRD Jukebox - MARCH 2019 Welcome to HRD Jukebox!  This new feature on Hard Rock Daddy is the evolution of Music Discovery Monday.  It is designed to expose our readers to outstanding hard rock / metal music that isn’t likely to gain traction on … END_OF_DOCUMENT_TOKEN_TO_BE_REPLACED

TOP 20 HARD ROCK SONGS OF 1974 Since launching Hard Rock Daddy in 2013, one of the most popular features is the annual top hard rock songs of the year list.  Tomorrow is the six-year anniversary of our launch.  The site has evolved in a … END_OF_DOCUMENT_TOKEN_TO_BE_REPLACED

For all questions, requests and artist submissions:

It was a cool November morning in 1977.  I woke up early, excited to celebrate my 9th birthday and open my presents.  Unwrapping the big one first, I was psyched to see that it was the boombox that I had asked for, but the smaller present is the one … END_OF_DOCUMENT_TOKEN_TO_BE_REPLACED

Thanks! You Rock! We promise never to sell your share your email.